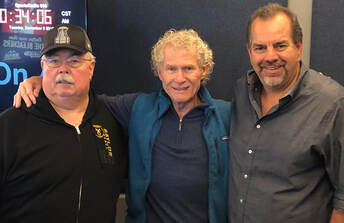 McClain, who will be inducted into the Texas Sports Hall of Fame in 2020, joined the Chronicle in 1976 and is a Baylor graduate. Lopez, a Texas A&M graduate and a native of San Antonio, became an on-air Sports Radio 610 personality in 2009 and currently co-hosts the midday show, In The Loop, with Landry Locker. Robertson is a University of Houston graduate.
​
Both Lopez, aka “The OG,” and Robertson, who answers to “sportywineguy” on Twitter, were columnists opining on all sports for the Chronicle. Lopez is the author of well-received books on gymnast Kerri Strug and former Houston Oilers quarterback Dan Pastorini and is a competitive salt-water fisherman. His podcast, Bite Me, has been ranked as the best on gulf fishing in the United States.

McClain has served on the NFL’s Hall-of-Fame selection committee since the early 1980s and received the 2006 Dick McCann Memorial Award for his distinguished career as a pro football writer. Lopez has helped select the Heisman Trophy winner since 1985 and became a Baseball Hall of Fame voter in 1999.

Robertson retired from the Chronicle in February 2019 as the longest-tenured sports writer in Texas and continues to cover Houston’s professional golf and tennis tournaments. He also continues as the paper’s wine columnist. He was presented with the 2010 Fred Hartman Award, was recognized by the Texas Daily Newspaper Association as Sports Writer of the Year, and, in December, received the 2019 Ron Stone Media Excellence Award from the Houston Touchdown Club.