During the 19th century American artists began to excel in their own right, creating an American style no longer dependent upon European models and artists. Some American artists trained in Europe, but by this time America had established its own art schools.  This included the Hudson River School, which developed a distinctive style of painting that highlighted the American landscape. Realism – which sought to convey democratic values with subtly heroic images of American life – was arguably the first movement to give American artists a full opportunity to shine on their own.  Artists were able to find their place and their own unique visual language.

Idyllic Times showcases the developing styles of American art from the late 19th century to the early 20th century. Tonalism, inspired in part by the Hudson River School, is represented in the exhibition by George Inness, a prominent leader of this artistic style. Tonalists painted landscapes with an overall tone of colored atmosphere or mist. The artists' color palette typically included neutral hues of brown, green, gray, and blue. 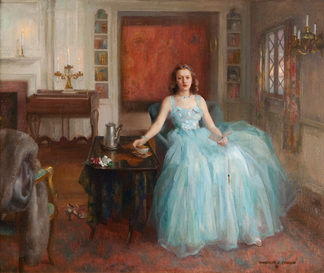 American Impressionism also rose to prominence during this time period. Embracing the rich colors and loose brushwork of their French counterparts, American Impressionists painted pastoral scenes and images of tranquil domestic life. In an effort to showcase America’s economic prosperity, these scenes of domestic life often depicted the lifestyle of the upper class.

One of the best ways to understand the character and history of America is to look at her paintings, which present personalities, scenes, and ideals that have helped shape her. It is a more tactile and enticing way into history than can come from any written text. A great deal of America is encapsulated in this exhibition, and walking through the gallery will certainly evoke a play of emotions – the innocence of childhood, the awe of nature, and the humor of everyday life.

This exhibition assembles thirty paintings from the holdings of Houston collector Gary T. Leach. Enjoy the journey through these Idyllic Times when the exhibition opens in the Main Gallery on September 19, 2020.
​Above:
Marguerite S. Pearson, After the Ball, n.d., acrylic on canvas, 30" x 36"
Courtesy of the Gary T. Leach Collection