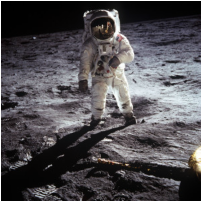 “Standing on the Moon” presents photograph reproductions of images from NASA’s Apollo Program, the first spaceflight program to successfully land humans on Earth’s moon. This collection of images highlights the historic flights of the manned Apollo missions (Apollos 11-17) and their significant achievements in science and technology.

The exhibition inherently emphasizes the multiple roles of photography and film in space exploration. Lunar photography was a stated objective of each Apollo mission, and was critical in determining future lunar landing sites, furthering scientific study of the lunar surface and atmosphere, recording mission activities, and more. The medium allowed astronauts to record magnificent views of Earth from space and, perhaps more importantly – to share these views with millions who would likely never have the opportunity to observe these images directly. Advancements in film technology afforded a similar sharing experience for the general public, most notably with the live television broadcast of the Apollo 11 journey in July of 1969.